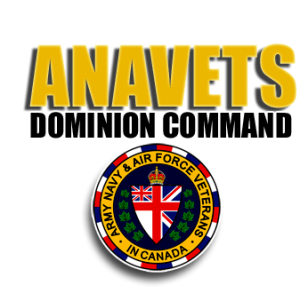 ANAF units (commonly called ANAVETS) are comprised of a Dominion Command as well as seven provincial commands. Ottawa, ON, is home to the Dominion Command Headquarters, whereas the other commands are situated in British Columbia, Alberta, Saskatchewan, Manitoba, Ontario, Quebec, Nova Scotia and New Brunswick, as well as a unit in the United States (ANAVICUS), which is part of the American Legion. There are also Ladies’ Auxiliaries associated with some of the provincial units, which come under jurisdiction of the Provincial Commands’ Ladies’ Auxiliaries.

Visit anavets.ca for more information on the Dominion Command.