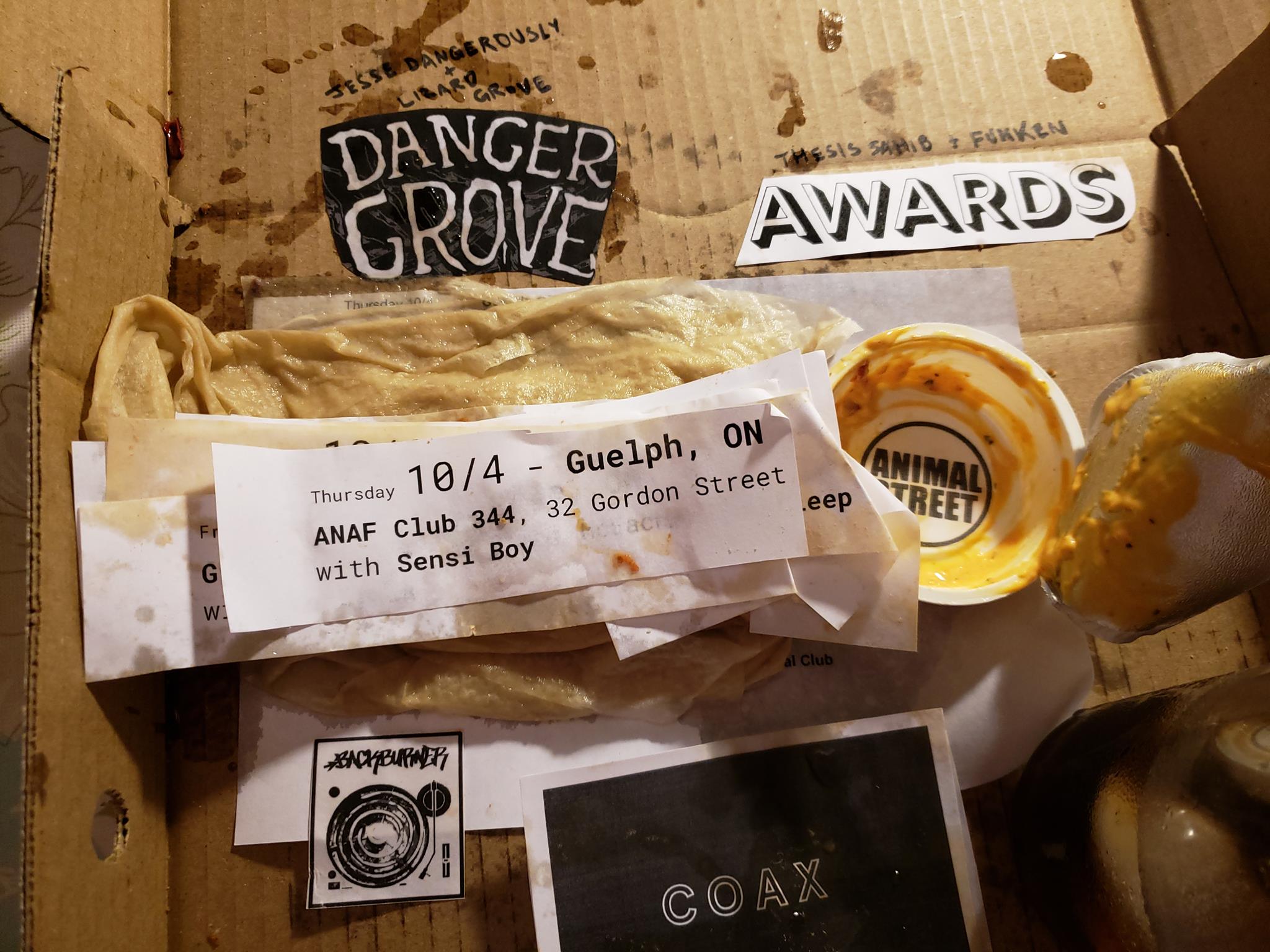 Check out the event on Facebook by clicking here!

Two of Canada’s most innovative hip-hop/electronic duos are teaming up this October to tour in support of their respective full-length debut albums. London, Ontario-based AWARDSwill release Warm Computers on Oct. 12, the first album as well for Animal Street Records. The following week (Oct. 19), Ottawa-based Danger Grove will release Want, For Nothing on Coax Records.

While both projects have their own unique attributes, they represent the cutting edge of Canadian hip-hop, expanding the genre into the electronic realm, with lyrics that reflect contemporary politics and issues revolving around mental health and the effects of technology. This is a tour not to be missed!

Their joint album release party in Guelph is on Thursday October 4th at the ANAF. Joined by Guelph’s own sensitive Sensi Boy, this is going to be an incredible show. This is Hip Hop like nothing else. It’s going to be fantastic. Scroll down to see some links, then click on those links to hear all this magical music.

About Danger Grove:
One day in the Enchanted Wood, in a dark and humid grove, there was a stirring and a little animal called Lizard brought a beat she had made to a large, cynical, tenuously notorious animal called rap legend Jesse Dangerously. rap legend Jesse Dangerously roared their appreciation – that tastes pretty good! Is there more! – and Lizard said yes I have got more. I’ll make more. There is more.
A wise old owl said they were influenced by Aesop Rock and Ramshackle Glory, and that the album they made together sounds like “if Drake listened to Neutral Milk Hotel.” It’s true they paid the owl to say this, but that doesn’t mean he was lying. Money words can be true ideas. He even said they could “chance the shape of Canadian hip-hop to come” but gosh, who knows?

Link to their new album, Want, For Nothing, on Coax Records:https://www.coaxrecords.com/store/danger-grove-want-nothing-2018/
Their last album: https://dangerously.bandcamp.com/album/dangergrove

About Awards:
Awards are important in the eyes of some that are interested in that sort of thing.
Awards can be time based, often only applied to a specific region. As a tribe or group expands, or trades it’s mantra, others can understand the importance of awards passed down from generation to generation.
Most awards are meant for celebration to mark an achievement, but sadly to admit, Awards become useless as everything returns to the earth in the end. For now though, we do hope you can follow and enjoy.
Awards have their own sleeping bags we will come to your town.
Awards are Thesis Sahib and Funken

About Sensi Boy:
$ensi Bo¥ combines the influences of retro art rap and the modern cloud/emo trap popular in the soundcloud rap scenes in California and New York. Often mixing that with local artists like Evan and Geordie Gordon, Noah23 and Motëm. The Sensi Boyz movement is motivated by the desire to eliminate the stigma around publicly expressing emotions and feelings that many people still feel on a daily basis in North America.